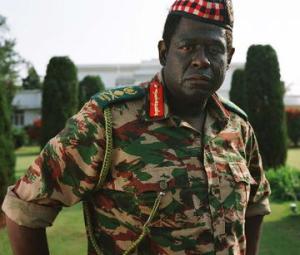 The Last King of Scotland, apparently.....favourite colour probably not Orange, then.

I’ve just been reading about the assault on Neil Lennon. Apparently, he manages a little-known Scottish football team called Celtic. A geezer who supports Hearts (the football team, not the anatomical pumps) attacked him calling him “A Fenian bastard”.  This is newsworthy, apparently. Now, I know one side of this childish, stupid celtic (not Celtic FC) religious divide likes the colour Orange – I assume it’s Lennon’s, because he’s ginger…but then most Scots are ginger, so…I’m confused. All this “my God’s bigger than your God hail hail rock’n’roll” or some other bullshit is REALLY BORING. Anyway, my point is:

The killer of head teacher Philip Lawrence is found not guilty of robbing a man at a cash machine in north London.

Well, that’s alright then, isn’t it? We can all sleep a little safer in our beds.

As the 70’s detective Columbo might have said: “Just one more thing….”

-WHAT KIND OF JUSTICE SYSTEM ALLOW THIS PIECE OF GARBAGE TO BE OUT ON THE STREETS IN THE FIRST PLACE??????